“La loba does the work of gathering all the bones together, then sits at the fire and sings over the bones, and as she sings, the bones flesh out.” excerpts from the book “Women who run with the Wolves” written by Clarissa Pinkola Estes.

Singing the Bones is a dance music piece which explored the wild in woman.

It has been also for me an investigation on how to direct a piece with its specific topic while working on improvisation as a way to compose.

It developed in two phases with two different casts which I gathered respectively in 2001 and 2002. 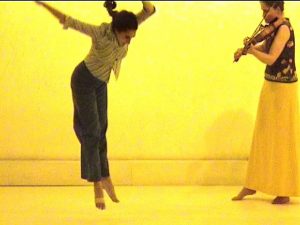